Harnessing Research to Uphold U.S. Democracy and Rule of Law

A con­fer­ence bringing together academics, policy prac­ti­tion­ers, and jour­nal­ists and cospon­sored by Bright Line Watch, the World Justice Project, and Dartmouth’s Wright Center for the Study of Computation and Just Societies was held at Dartmouth College on December 2–4. The con­fer­ence featured research pre­sen­ta­tions by top scholars from leading uni­ver­si­ties including Harvard, Stanford, Michigan, Chicago, and Emory. Topics included chal­lenges to the demo­c­ra­t­ic process and electoral integrity, the role of media and the infor­ma­tion ecosystem, and judicial inde­pen­dence, integrity, and guar­an­tees of the rule of law.

With unprece­dent­ed legal inves­ti­ga­tions focused on former president Trump and some of his sup­port­ers, wide­spread concerns about the will­ing­ness of can­di­dates to concede election losses and ongoing threats of political violence, the fall of 2022 is a pivotal moment for American Democracy.  Join expert panelists from Bright Line Watch and the Democratic Erosion Consortium to learn about findings from the October and November 2022 waves of the Bright Line Watch expert surveys and discuss their impli­ca­tions for American Democracy.

This virtual panel was livestreamed on Monday, December 5. The recording of the panel can be accessed here.

The third Bright Line Watch con­fer­ence, “Constitutional Hardball Roundtables” (co-sponsored with the Weatherhead Research Cluster on Challenges to Democracy at Harvard University), was held at Harvard University on December 13th and 14th, 2019. The round­ta­bles brought together leading scholars, politi­cians, and jour­nal­ists to discuss how the descent into con­sti­tu­tion­al hardball affects American democracy and how best to respond to it. The questions addressed by the panelists included:

- How has con­sti­tu­tion­al hardball played out in partisan fights over voting rights?
- Can divided gov­ern­ment function in a context of hyper-polar­iza­tion?
- What are the appro­pri­ate standards for pres­i­den­tial impeach­ment?
- What accounts for the rise of con­sti­tu­tion­al hardball between Democrats and Republicans?
- In a polarized envi­ron­ment, how can courts be de-politicized?

The second Bright Line Watch con­fer­ence, Democracy’s resilience: Is America’s democracy threat­ened?, was held at The Brookings Institution on May 1, 2018.  In the aftermath of the 2016 election and during the tumul­tuous first year of the Trump pres­i­den­cy, observers across the political spectrum have struggled to antic­i­pate the likely con­se­quences for American democracy. Never before has a sitting president so harshly ques­tioned the integrity of elections, chal­lenged the sep­a­ra­tion of powers, and verbally threat­ened the freedom of the press. Partisan polar­iza­tion is at an all-time high, public trust at a historic low. For many Americans, democracy seems more imperiled now than at any time in living memory. And similar problems are afflict­ing other democ­ra­cies around the world.  The Brookings Institution and Bright Line Watch brought together the authors of four prominent new books to weigh in on the status and prospects of America’s democracy.

One Nation After Trump  by E.J. Dionne, Norm Ornstein, and Thomas Mann

How Democracies Die  by Steven Levitsky and Daniel Ziblatt

The People vs. Democracy  by Yascha Mounk

Anti-Pluralism: The Populist Threat to Liberal Democracy  by Bill Galston

Each book offers its own unique look at how we arrived at this moment, with an American president who is sin­gu­lar­ly trans­gres­sive of demo­c­ra­t­ic norms, and how the country might best move forward. The authors discussed their books and joined a panel of experts to further examine the status of American democracy and solutions to ongoing chal­lenges facing political insti­tu­tions in the United States. Following the dis­cus­sion, the panel took questions from the audience.

How Do Democracies Fall Apart? (And Could It Happen Here?)

The first Bright Line Watch con­fer­ence, How Do Democracies Fall Apart? (And Could It Happen Here?) was held at Yale University’s MacMillan Center on October 6, 2017.  Conference papers  are available here.  Videos are available of all sessions:  welcome, session 1, session 2, session 3. 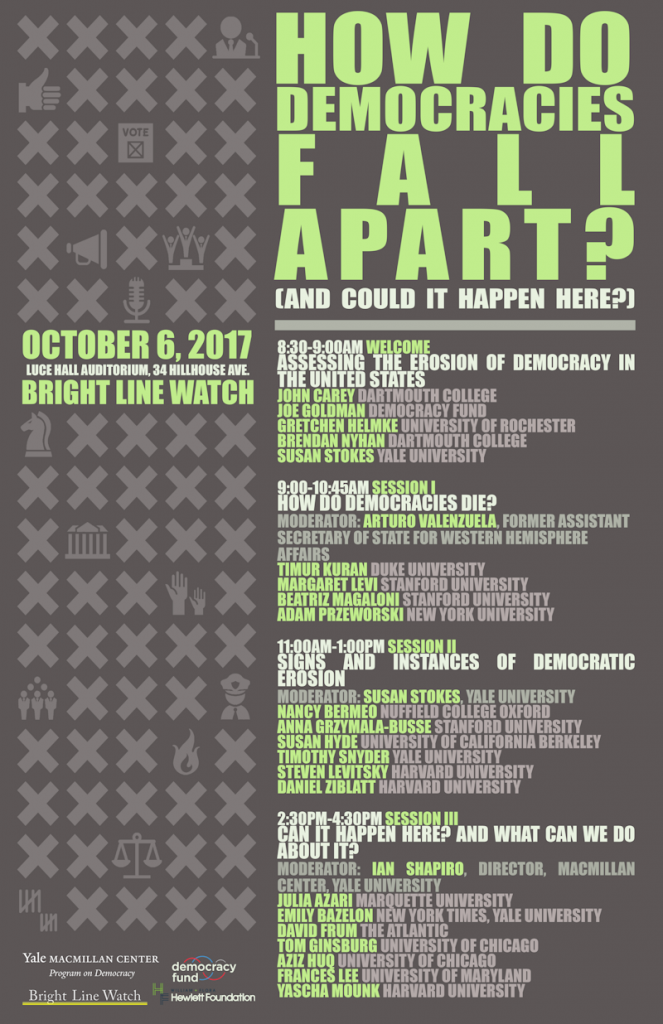